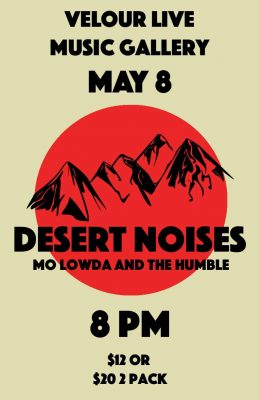 Presented by Velour at Velour

Desert Noises:
Since originally forming in Provo, UT Desert Noises have played or toured with Shakey Graves, Rayland Baxter, Wild Child and the Mowglis, to name a few, as well played festival like Lollapalooze, ACL, Hang Out Fest and Voodoo.
http://desertnoisesband.com

Mo Lowda & The Humble:
Mo Lowda began with 3 high school kids. Those kids all ended up at the same college in Philadelphia, PA where other kids wanted them to play at their basement parties all the time. So, they did. All the time. They are no longer kids. Two full-length albums (2013, 2018) and an EP (2016) later, Mo Lowda & the Humble now average 100+ tour dates a year, nationally and internationally, including festivals like Firefly, Peach Fest, Mountain jam, and more. When they are not on stage, they are laughing. Sometimes even when they are on stage, they are laughing. The band is slated to release their third full-length in early 2020.
www.molowda.com