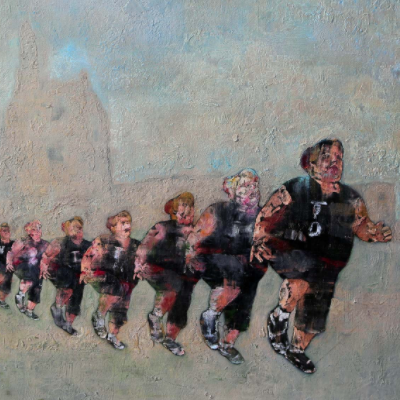 Our bodies can be thought of as landscapes hewn by biological tectonics, from the tautness of supple youth, through the zenith of physical prime, and onto the gruesome physics of decay and infirmity. These corporeal vessels also carry the cumulative effects of illness, injury, and destiny, recorded in the molecular register of who we are, and how—even when—we will devolve and return as dust to the celestial ether. We are impermanence that seems eternal; we are both confined, and released by our bodies, and the course that they have set for us. And they are still the primeval measure by which we are judged, categorized, accepted or dismissed by society, and—often, harshly—by ourselves. It is in this most immediate crucible of human experience that John Sproul connects empiric responses to his body’s changing disposition, with creative investigation regarding cultural standards, selfhood, worth and presence. He peers into the two-way mirror through which we view the world, while mulling how it looks at us in reply. These are our casings, the shells, that are vulnerable until they are not; and powerful until they are not. Sproul considers these themes through the seven acrylic-on-canvas paintings, and five sculptures that comprise his solo exhibition “Serenity Now!”

In this field of what might be considered bio-emotive mechanics, artists of particular incisiveness include Hugh Steers, whose harrowing romanticism, and secretive, otherworldly vignettes of young men in dimmed, domestic aloneness, or quiet, reflective coupledom are infused by the sadness of the artist’s HIV diagnosis. The work has gained unbearable pathos since his early death, alchemizing the heart-breaking into the sublime. Later in life,  John Coplans photographed his dilapidated flesh, as a way to reanimate or enliven that which was inexorably failing, or at least hold it in stasis two-dimensionally, in a kind of artistic zombifying act. And Jenny Saville’s titanic, corpulent nudes—dominant and unflinching—scorched the spurned, bloated aspects of female physicality—in bruised and visceral slaughterhouse colors—into the  resistant psyche of gender politics.

John Sproul offers a different timbre; less a set of static momentary archives, and more a panorama, stretching from childhood, and likely continuing from the present along the remaining span of his existence; his art is based in the amphitheater of physical evolution. Overweight in his early years, and bullied for it, Sproul grew into a leaner, taller frame that became an asset, or a sanctioned motif of desirability. This shifted him, or external perception of him, from shamed to wanted. Premature hair loss in his twenties, was followed by medical conditions—Hypoglycemia, Rosacea, carbohydrate intolerance—in his thirties and forties, along with lifestyle changes intended to ameliorate their effects. Now in his fifties, Sproul is—as we all must—adapting to the decline of his stamina, vitality and physical capacity. This ebb and ebb, in tandem with personal and social consequences has fueled his creative drive.

The potency of Sproul’s work lies in an oppositional tension; the nuanced, patient observation of cumulative alterations. It’s a quiet thrum, a speculativeness, and engagement with the murmurings and eddies of organic processes, but it is set against an anxiety, and agitation, which is manifest in repetitive motifs, faceless bodies, and painterly obsessiveness.

n Jazzercise Me, 2020, a long column of overweight, ruddy-skinned women proceeds toward the viewer, and out of the picture’s right frame, in a single-file formation. Each figure tightly follows the previous one, in the same pose—right leg lifted, with left arm raised, in a confident running motion. They make for a charismatic squad. They sally forth not from a stadium, but what appears to be a romantic ruin—a castle or grand house in the distance. It is perhaps a crumbling, metaphorical bastion of opprobrium, rejection or ridicule toward those not fitting athletic ideals, or the notion that they cannot be impressive, arresting or even seductive. All of the ladies are wearing identical black uniforms, which adds to the dazzling effect, like a well-drilled military vanguard, or sports team, entering the field primed for battle. There is a mote of levity in the image, and it is interesting to ponder whether this would be so if the women were lithe, lean, and stereotypically fit. An extreme  analysis of this thought can be discerned in Skinny Itch, 2020, which portrays three emaciated, feminine bodies in matching underclothes. The title is a clever pun on a common, if wry, begrudging compliment—one that offers both praise and envied resentment to the receiver (it might also be a straight-forward insult depending on the speaker’s intent.) Yet for these boney, raw-skinned protagonists weight loss may have become an unhealthy infatuation. The painting’s title also points to irritation and discomfort—ostensibly in regard to skin conditions, but perhaps less superficially, self-loathing or related emotional distress.

Am Am.  60×48″.  2019.
Am Am (2019) depicts a single, plump, bald man wearing brown shorts and slippers, staring at the viewer, and holding an assertive stance, with his hands clenched into fists at his side. A grayish-white background, contrasts with his blotchy, scarred flesh, and displays a series of mantras written in short, stumpy block capitals. His demeanor, and the writing seem confident; or they are trying to convince us that they are? “I am heavy and I am not ugly,” “I am heavy and I am not stupid,” “I am heavy and I am valuable,” are among the affirmations. They raise the awkward probability that when one is resolved about who one is, there is no compulsion to state one’s virtues. Here, the declarations are not boastful, but uncertain. Yet neither are they offered as negative-leaning compensations for being fat, as they would if the conjunction were “but” instead of “and.” As we have it, the suggestion is that being overweight does not need to mean a lack of self-confidence or dignity. There are still hints though, that like all of us, our hero craves acceptance; “I am heavy and I need your love and kisses.”

Black Hole,  2020.
The sculptures are also rooted in bodily politics, but they are less direct interpretations, offering a more spiritual tone. To create the forms, Sproul layers translucent images of bodies atop each other until an intuitive, balanced essence emerges from the compositions. In the resulting pieces, which are made of plant-based filament, there is a cellular, molecular aspect to them as if seen through a microscope. The deep orange, Mr Sparkle, and the dark, Black Hole, (both 2020) are exemplary. There is something alien, even threatening about their shapes, and yet they are mesmerizing objects. The gelatinous yet thrusting shards, and jagged forms seem in the act of tropism, as if mutating. They also convey the disquiet, suspicion, and distaste that our bodies can provoke when they fail, can no longer be controlled, or don’t fit our aspirations for them. They constitute a kind of visual consonance which is drawn from the body materially, but morphed into abstracted interpretations of it, suggestive of spectral enigma, and the gossamer apparitions of our souls.

Beneath the surface of Sproul’s work, his thoughtfulness crackles along the arc of a human lifetime, encompassing, and gesturing toward our physical rise and fall. The work isn’t explicit, but it makes us aware of the somatic spectrum, from its most sought after attributes—growth, sexual desire, beauty, agility—to the filthiest, abject degradations—affliction, disease, malodors, and degeneration. Sproul offers layered clues along the knife edge between consuming attractiveness, satisfaction and pleasure; and bilious revulsion, disappointment, and horror. The artist’s almost preternatural deftness, and sensitivity to these issues positions him as a cultural sentinel surveilling an inexorable journey that none of us can avoid.
Darren Jones

Darren Jones is a Scottish art critic and curator based in the United States. His reviews, and essays have been published in ArtUS, Artslant, Brooklyn Rail, MutualArt, and Artsy. He is a regular contributor to Artforum, and he is the New York contributing editor for New Art Examiner. His book, The Contemporary Art Gallery: Display, Power and Privilege, co-authored with David Carrier, was published in 2016. In 2018 Jones was awarded a Creative Capital/Andy Warhol Foundation Arts Writers Grant; in 2019 he was a critical fellow, at Granary Arts, Utah; he is the 2020 critic-in-residence at SPACES, Cleveland. His projects have been noted in The Guardian, The Los Angeles Times, Huffington Post, and Scotland on Sunday. Jones teaches curatorial studies at the Maryland Institute College of Art, in Baltimore.

Serenity Now!  will be open  by appointment to the public through Friday, January 1, 2020.  There will be receptions during each Gallery Stroll between now and then .  For more information and to make an appointment please contact john@johnsproul.com.or 801.289.6269.

Directions:  The gallery is located in the Homeless Healthcare Clinic complex at 440 S 400 W, in the south west corner.  If coming on I-15 take the 600 S exit and turn left on 400 west, make a u-turn at 400 south and take your first right into the gating parking area and drive to the end, the gallery is the last door on your left, Suite H.  If you are coming from the north on I-15 take the 400 south exit and turn left on 400 west and follow the instructions above from there.