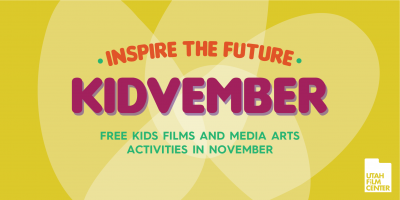 Utah Film Center presents Kidvember, a lineup of films for kids available to stream for free on Tuesday, November 10, 17, and 24, complemented by media arts activities from community partners throughout November.

Kidvember is a month-long celebration of film to inspire future leaders, with a focus on international stories and the impactful films programmed during the annual Tumbleweeds Film Festival. The films encourage anyone, regardless of background, age, religion, or circumstance to make a positive impact in the world.

Brave, funny, and one of a kind: that’s Rocca. Rocca is eleven years old and lives a rather unique life. While her dad is watching over her as an astronaut from outer space, Rocca lives alone with her squirrel and is attending a normal school for the first time in her life. At school her carefree and non-conformist way of life instantly stands out. She fearlessly confronts the class bullies, because first and foremost Rocca stands up for justice. That’s why she makes friends with the homeless Caspar and tries to help him. All the while she is also attempting to win over her grandmother’s heart. With never-ending optimism Rocca proves together with her new friends, that even a child has the power to change the world.

Meet passionate teenage innovators from around the globe who are creating cutting-edge scientific solutions to confront the world’s environmental threats – found right in their own backyards – while navigating the doubts and insecurities that mark adolescence. Take a journey with these inspiring teens as they prepare their projects for the largest convening of high school scientists in the world, the Intel International Science and Engineering Fair (ISEF).

THE DAY MY FATHER BECAME A BUSH

Ten-year-old Toda lives in a bakery with her dad, the best pastry chef in town. Toda knows everything there is to know about cakes and pastries and loves it when her dad plays the trumpet. But one day, everything changes: her dad is called away unexpectedly to defend his country. Toda has to undertake an adventurous and challenging journey to the unknown neighbouring country where her mother lives in order to stay safe. On the way she meets strange people, encounters absurd situations and finds a special new friend. Toda is a bright, optimistic and resilient girl who doesn’t give up easily, but will she eventually find her mum?