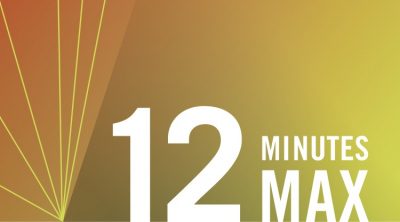 The Salt Lake City Public Library will present a live stream of its 12 Minutes Max program on Sunday, November 15, at 2pm. 12MM is a curated monthly experimental performance series featuring new original works by local artists in many disciplines.

12 Minutes Max is a curated monthly experimental performance series, presented by the Salt Lake City Public Library, featuring new works and works-in-progress by local artists in many disciplines: dance, music, film, theater, writing, performance art and the like. Each event includes three varied performances, with a short Q&A after each piece. It is modeled after the program originated by On the Boards in Seattle.

The City Library will present a live stream 12 Minutes Max on Sunday, November 15, at 2pm. Please join us using this link.

Steven Stallings Cardenas will screen his recent film Anoche, “an ode to my abuelo who tirelessly works for his dreams.”  This film was part of a recent presentation of Utah artists called A Stones Throw, curated by Jared Steffensen from UMOCA. Steven is an artist, musician, and filmmaker now based in Portland, Oregon. He graduated from Brigham Young University and currently has a solo show running until January 22nd at Granary Arts.

E’lise Jumes (she/her) will present her screendance soft season, filmed in early March 2020,pre-COVID on Eastern Shoshone Land. She says about the piece: “Waiting for something to happen. To go? To stay? To get redirected? One thing happens and then the next, and then the next and then the…    Dropped into a moment fleeting in time. Where something was happening before. Where something is happening now and will continue to happen whether you see it or not.” Jumes is an interdisciplinary artist and researcher. She received her MFA in Modern Dance along with a certification in Screen Dance from the University of Utah- School of Dance. She now lives in the Philadelphia area where she is currently a new Assistant Professor of Dance at DeSales University.

Musician and “joyful generalist” Luke Williams will present Filling when the film runs free, a set of single-take recordings that mangle The Alchemist In Hollywood, a 1940s educational film about film. These songs follow the logic of that lovely mise en abyme, built up and broken down from recombinatory language and an increasingly granular approach to sampling the source material. The accompanying videos capture the recording process: live-layered visuals and loosely arranged performances for the OPZ, a tiny and unruly instrument. Luke was born and raised in Salt Lake City and currently lives in Buffalo, New York.