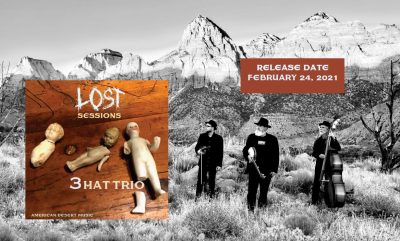 Z-Arts and Kayenta Arts Foundation are pleased to present 3hattrio in a virtual performance and artist Zoom reception as they launch their new CD, “The Lost Sessions.”

Rooted in the natural world of their sacred homeland, Zion National Park in Utah, 3hattrio call their music “American desert,” a simple idea for complex sound. More like extended landscapes — bare mesas ringing with electronic echoes of acoustic instruments — their music twists and turns as the wind shifts.

3hattrio makes recordings of their informal music in the way that some people chronicle dreams. It was a summer chock full of wonderful recordings, creative ideas, 3hattrio at its best, all hidden and safe on the hard drive. At least that is what the group thought until that day a piano accidentally fell on the hard drive smashing it to smithereens.

Greg Istock, keeper of the music, looked on as the summers work lay in wreckage. He observed, “Lost can carry different meanings. It can be something misplaced with hopes for resurfacing but this loss was brutal and final, a cruel twist of fate.”

Later that year Greg found a company that specialized in retrieving lost data from crushed hard drives. They did not promise much but after examining the drive they surprisingly were able to restore some of the data and said we would get a new hard drive soon. When it arrived, there was nothing on it. It was blank. We alerted the company but they said that due to a Covid lockdown there was little chance of finding the illusive lost data. After another couple of months a second hard drive showed up unexpectedly. As the new drive loaded Greg saw recognizable file names. It was the music, the scorched data, almost sacred in its mysterious loss. The lost music is this recording.

This event will be held on Wednesday, February 24th with the virtual concert. A link will be available at 3:00 PM MST to watch the performance at your convenience. A live Zoom reception will be hosted by Z-Arts at 8:00 PM MST.

Tickets are $10 per household (for the concert link and live reception) and can be purchased through EventBrite.

This event will be held on Wednesday, February 24th with the virtual concert. A link will be available at 3:00 PM MST to watch the performance at your convenience. A live Zoom reception will be hosted by Z-Arts at 8:00 PM MST.