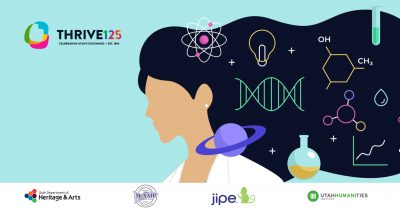 From nuclear power to cutting edge medical science, the history of science and technology in Utah is rich with hope, drama, and excellence: Come learn of Utah’s contributions to human advancement and meet two of Utah’s emerging leaders in STEM.

Eric Swedin is a professor of history at Weber State University in Utah. He has written several non-fiction textbooks and academic works, as well as five novels, and his books and papers have been cited in over 70 academic works.[2] He won the Sidewise Award for his 2010 alternate history novel, When Angels Wept: A What-If History of the Cuban Missile Crisis.[3] He was a consultant on two documentaries about the Cuban Missile Crisis: Clouds Over Cuba, which won an Emmy Award,[4] and What If…? Armageddon 1962, a documentary which aired on the Military Channel in 2014.

Rosa Mendez is McNair Scholar and Chemistry student at Westminster College. She was born in Mexico and migrated into the USA at the age of 14. After graduating in May 2021, she hopes to enter an MD/PhD program. Rosa is passionate about biological and chemical pathways.

Jipe’s founder, Brenda Anderson, is one of the less than 5 percent of female Utah CEOs. She lives her life unafraid to uncover and execute ideas that change the way we think—while bringing creative ease to the way we live our lives in a world centered on technology. As a strong, ambitious, single mom of two teenage boys, she saw a need for an app that made searching for an entry-level job easy and familiar, especially for the Gen Z population. Over the course of a year, after surviving brain surgery, Brenda worked toward her goal of building Jipe during every spare hour. Today she is proudly showcasing Jipe to both job seekers and businesses. The reviews are in: Jipe is needed and relevant, and it is creating a stir in the industry.

This event is made possible with the support of the Ronald E. McNair Posbaccalaureate Achievement Program at Westminster College, Jipe Jobs, Utah Department of Heritage and Arts, and Utah Humanities.