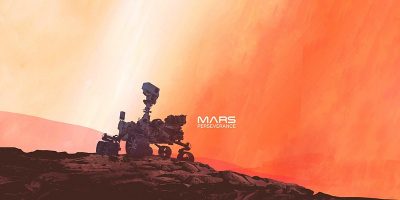 Join us for a special virtual presentation as former NASA astronaut, Dr. Jeffrey Hoffman, discusses the Mars 2020 mission and the production of oxygen from extraterrestrial material. Register online.

Mars 2020 is a NASA mission set to look for signs of ancient life on the red planet and to collect samples of the Martian surface for eventual return to Earth. The mission will become reality on Feb. 18 when the rover, Perseverance, sets down in an area known as the Jezero Crater. Scientific evidence suggests that a river once flowed into the crater, leaving behind a dry river delta, making Jezero the perfect place to look for signs of ancient life.

Join retired NASA astronaut and current Deputy Principal Investigator for the MOXIE experiment, Dr. Jeffrey Hoffman, to learn about Mars 2020 and the MOXIE science experiment, which for the first time will produce oxygen on the surface of Mars. Q & A session to follow.​

Dr. Jeffrey Hoffman is a professor at MIT’s Aeronautics and Astronautics Department. He received a BA in Astronomy (summa cum laude) from Amherst College (1966); a Ph.D. in Astrophysics from Harvard University (1971); and an MSc in Materials Science from Rice University (1988). As a NASA astronaut (1978-1997) he made five space flights, becoming the first astronaut to log 1000 hours of flight time aboard the Space Shuttle. Dr. Hoffman was Payload Commander of STS-46, the first flight of the US-Italian Tethered Satellite System. He has performed four spacewalks, including the first unplanned, contingency spacewalk in NASA’s history (STS 51D; April 1985) and the initial repair/rescue mission for the Hubble Space Telescope (STS 61; December 1993). As the Astronaut Office representative for EVA, he helped develop and carry out tests of advanced high-pressure space suit designs and of new tools and procedures needed for the assembly of the International Space Station. Following his astronaut career, Dr. Hoffman spent four years as NASA’s European Representative, working at the U.S. Embassy in Paris. In August 2001, Dr. Hoffman joined the MIT faculty, where he teaches courses on space operations and space systems design. His primary research interests are in improving the technology of space suits and designing innovative space systems for human and robotic space exploration. Dr. Hoffman is director of the Massachusetts Space Grant Consortium, responsible for space-related educational activities. He is Deputy Principal Investigator of an experiment on NASA’s Mars 2020 mission, which will for the first time produce oxygen from extraterrestrial material, a critical step in the future of human space exploration. In 2007, Dr. Hoffman was elected to the US Astronaut Hall of Fame.

Special thanks to our event sponsor, Wells Fargo.