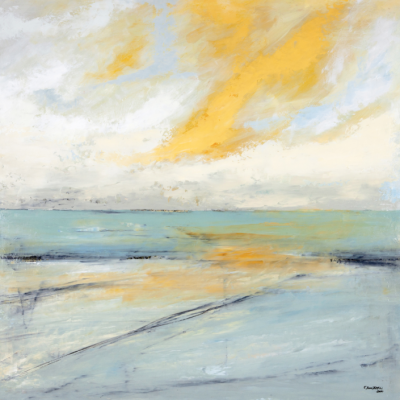 Phillips Gallery is pleased to present TOM BETTIN’s spirited and sometimes mysterious work. Using monotype as a base, his images are subjected to several runs through the press creating a complexity that the average print does not usually endure. Next, he further works the surface by adding a combination of mixed media including chine collé (thin paper adhered with paste), pastel, and sometimes paint. Each element delicately complements the next. The result is a well-planned journey through an obscure yet somewhat familiar landscape. In addition, Bettin will be showing several oil paintings that produce a richly similar effect. Tom Bettin earned a Bachelor of Fine Arts at the University of Utah in 1976. He also attended painting and printing master’s workshops in Santa Fe between 1985-2000. He recently retired from teaching Visual Art at Judge Memorial High School.

STEVE DAYTON’s shadowboxes and paintings distinctively reflect his bright and quirky awareness. Employing his skill with wood, paint, and the occasional found object he brings to life small scenes that seem a curious mix of items. Always accompanied by an equally peculiar title, his work bemuses and delights. Dayton holds a Bachelor of Fine Arts degree in graphic design from Brigham Young University, 1988. While employed in the graphic design field in Sacramento, he started seriously working on fine art, creating serigraph prints and his first box assemblages. Since settling in Utah, he has taught himself to weave, make baskets, play several musical instruments (including playing with a folk group) and bake artisan bread—all the while working on his art. He has created several public artworks, including two temporary sculptures for Flying Objects 2.0 and 4.0 in Salt Lake City.