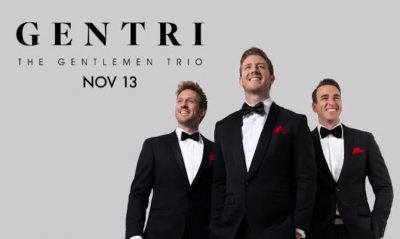 GENTRI, which is short for “The Gentlemen Trio” was established in June 2014 and is comprised of three dynamic tenors: Brad Robins, Casey Elliott, and Bradley Quinn Lever. Pioneering a signature sound they call “Cinematic Pop,” the music of GENTRI is transfused with lush, epic orchestrations and rich, dynamic three-part harmonies all composed by the group’s producer Stephen Nelson.

To date, GENTRI has released three EP’s and three full-length albums, the most recent being “Noel”, GENTRI’s second Christmas album, which debuted #6 on iTunes pop charts, just under Taylor Swift.  Almost all of GENTRI’s albums have reached #1 on various Billboard charts. The Gents are also known for their award-winning music videos, which have been featured on news outlets around the world including ABC World News, NBC Nightly News, and Inside Edition.

GENTRI has performed all over the United States and across the globe. They have shared the stage with world-renowned talent, including Tony Award-winning powerhouse Kristin Chenoweth, international tenor sensation Alfie Boe, Tony Award-winning vocalist Idina Menzel, and legendary rock bands Journey, Blondie and One Republic.