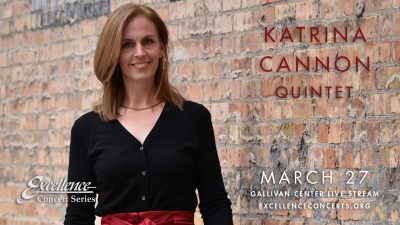 This concert includes covering her favorites from Dianne Reeves, Sarah Vaughan, Karrin Allison, Jobim and many others! Katrina is co-founder and lead vocalist of the Night Star Jazz Orchestra and is well known throughout the jazz community as an incredible artist and performer. She has been given the gift of song, fronting many different bands and musical styles. Her voice opens your heart. Ultimately, she seeks to design an experience that will take you other places, to remember, to find joy, to feel, laugh, love and connect.

Curtis Woodbury grew up in Salt Lake City, UT playing the violin in many orchestras and served as concertmaster of the Utah All-State Orchestra for two years. He later picked up the saxophone and became fascinated with jazz music, placing 1st overall in the Moscow International Jazz Festival on both the saxophone and violin. His debut album entitled “Curtis Woodbury” hit the top 50 nationally in jazz radio and has received positive reviews from many distinguished musicians. Curtis loves his wife and four children.

Steven Erickson is an accomplished pianist, arranger and composer in both the classical and jazz styles. He studied piano performance at Brigham Young university (BMus 1987), Rice University (MMus 1992), and the University of Kansas. Steve performed with US Air Force bands from 1997 to 2017, including 18 years with the premier jazz ensemble of the US Air Force, “The Airmen of Note.” He currently serves as adjunct faculty at BYU, UVU, and Snow College.

Matt Larson has the reputation as one of Utah’s premier jazz bass players. He plays both upright bass and bass guitar and feels comfortable on both instruments, allowing him to play many styles of music. He has performed and recorded with a variety of groups in the Salt Lake City and nearby areas.

Jay Lawrence has been on the jazz faculties of Brigham Young University, Snow College, Utah Valley University, the University of Utah, and others. Joining the Musicians Union at age 15, Jay played the Reno, Vegas and Tahoe showrooms with artists such as Cher, Sammy Davis Jr., Andy and Barry Gibb of the Bee Gees, Liberace, Ben E. King, Linda Ronstadt, Donny Osmond, and Gladys Knight. Jay has recorded percussion for movies including The Sandlot, Gettysburg, U-571, Three Ninjas Kick Back, and Nightmare on Elm St VII. His TV credits include ESPN, NBC’s Crossroads, the Merv Griffin Show from Caesars Palace, Orange Bowl Halftime show, Mrs. America Pageants, CMT video- Chris LeDoux’s Ridin’ for a Fall, and Xena-Warrior Princess. He has performed in concert with jazz artists including Milt Jackson, James Moody, Roy Hargrove, Hank Jones, and Carol Kaye (of the Wrecking Crew). Lawrence has recorded critically acclaimed albums “When I Look at You”, “Thermal Strut”, “Sweet Lime”, “Sonic Paragon”, and others with John Clayton, Bob Mintzer, Joey DeFrancesco, Renee Rosnes, Andy Martin, John Patitucci, Bob Sheppard, Wycliffe Gordon and Mike Stern. Jay soloed on KasKade’s twice Grammy nominated album Atmosphere. He can also be heard as a soloist on “The Mormon Tabernacle Choir and Friends”. Numerous awards have been given Mr. Lawrence, including: Twice being selected as the Utah Arts Festival Commissioned Composer and Award of Distinction (1st place) for his original composition This Monument of Faith in the Hymn category worldwide competition-2012. Moreover, Lawrence has authored 4 college pedagogical music manuals. He and his wife Linda have 6 children and 17 grandchildren.