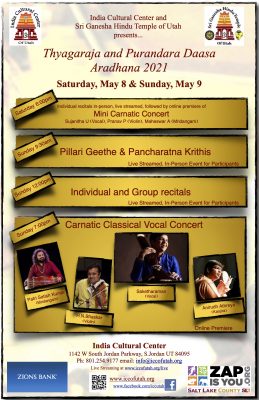 A day-and-a-half long annual festival of Indian Classical Music which happens on Mother’s Day weekend, in honor of the great composers of the genre.

Each year we celebrate the works of the founders and greatest composers of Indian Classical Music. Saint Thyagaraja, composed thousands of kritis mainly in Telugu and Sanskrit in invocation of Lord Rama. Purandara Daasa, a scholar, a HariDaasa, known as the father (Pithamaha) of Carnatic music is noted for composing Dasa Sahithya, primarily in Kannada and having systematized the method of teaching Carnatic music which is followed to the present day. He is known to have to his credit more than four hundred and seventy five thousand compositions, of which only about seven hundred are known today.

The community of the Salt Lake valley comes together to pay homage to these and similar great composers of Indian classical music on the Mother\’s Day weekend.

This year, the festival will be conducted in-person with restrictions. The participants will be performing in-person at the venue, with distancing requirements. The audience will be able to view and listen only through live streaming. We will make every attempt to keep this safe and enjoyable for everyone.

The event spans a day and a half, with mini-concerts at 6pm on Saturday, May 8; Community participation events of PiLLAri geethe and pancharatna krithies rendition starting at 9:30am on Sunday, May 9; Followed by Individual and group recitals in the afternoon.

The festival concludes on Sunday evening with a grand finale concert that premieres online at 7pm with a run-time of about and hour and a half.

This year the participants will be performing in-person, except for the two online premiered concerts.

Audience will enjoy the live streaming of the festival from the comforts of their homes.