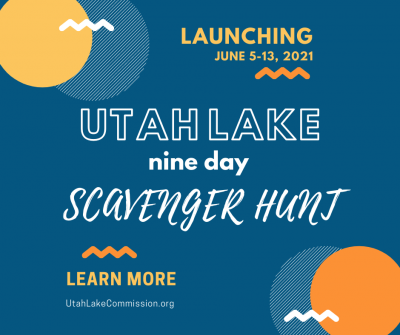 The Utah Lake Scavenger Hunt will have missions you can do at home or at the lake. Daily prizes based off points earned, and one really cool grand prize at the end!
The Utah Lake Commission and June Sucker Recovery Implementation Program are excited to announce the 2nd annual Utah Lake Scavenger Hunt!
Photo, Video, Text, and GPS scavenger hunt missions are created and assigned point values by organizers, and players are automatically awarded points after completing each submission on their device via the GooseChase app.
Missions will include answering trivia questions about the lake, watching videos with educational content and capturing photos or videos of various recreation activities and all sorts of missions to specific access points at the lake.
The scavenger hunt will start Saturday, June 5th at 8:00 AM and end Sunday, June 13th at 10:00 PM. Winners will be announced daily, Mon-Fri, on the Commission Facebook and Instagram accounts and in the GooseChase app with the grand prize winner being announced within a week of the hunt ending. Points accrued on weekends will count towards Monday’s daily prize and the grand prize. Each team may only win one daily prize per game. All teams, whether they have or have not won a daily prize, will be eligible for the Grand Prize.