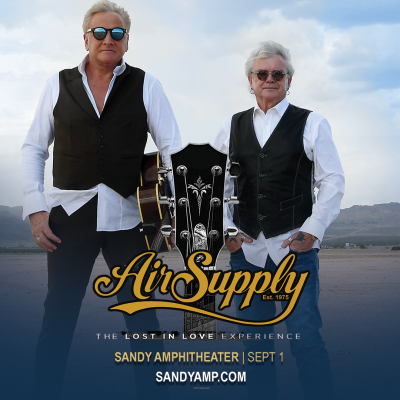 The trademark sound of Russell Hitchcock’s soaring tenor voice and Graham Russell’s simple yet majestic songs created a unique sound that would forever be known as Air Supply. “Lost in Love”, “All Out of Love”, “The One That You Love”, “Sweet Dreams”, and “Making Love Out Of Nothing At All” have each achieved multi-million plays on the radio.

Graham Russell & Russell Hitchcock met on May 12, 1975, the first day of rehearsals for “Jesus Christ Superstar” in Sydney, Australia; they became instant friends with their common love for The Beatles and, of course, singing. After a tour in the US they returned to Australia and made a record called Life Support. On this record were some treasures of songs, including “Lost in Love” after being signed by Clive Davis, “Lost in Love” became the fastest selling single in the world, leaping to the top of all of the charts.The second single was “All Out of Love,” and that went up the charts even quicker. Seven top-five singles later, Air Supply at that time had equaled The Beatles’ run of consecutive top five singles. The albums Lost in Love, The One That You Love, Now & Forever, and The Greatest Hits sold in excess of 20 million copies. “Lost in Love” was named Song of the Year in 1980, and, with the other singles, sold more than 10 million copies.