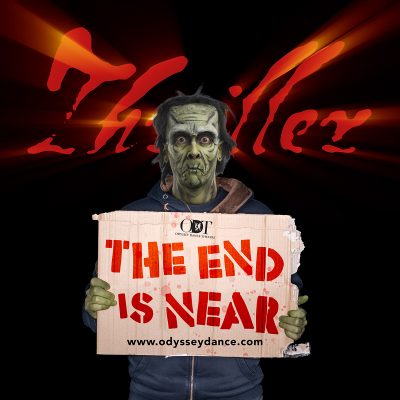 If Odyssey Dance Theatre’s Thriller isn’t part of your yearly Halloween tradition, it should be. The spooky spectacular combines technical aspects of dance while paying homage to the stars of All Hallows’ Eve.

After a 28-year mission of providing a space for talented dancers to stay in their home state of Utah and perform, as well as attracting talent from all over the world to Utah, Odyssey Founder and Artistic Director Derryl Yeager and his wife, Costume Designer/Costume Production Director Cheryl Yeager, will be onto the next ‘mission’ in their lives, serving a mission for the Church of Jesus Christ of Latter Day Saints.

If Odyssey Dance Theatre’s Thriller hasn’t been part of your yearly Halloween tradition in the past, it should be this year—your last chance to see Thriller. The spooky spectacular combines technical aspects of dance while paying homage to the stars of All Hallows’ Eve. Thriller highlights all the Horror characters of the season – such as Zombies, Frankenstein, Mummies, and Jasons, just to name a few!

“This show has become a phenomenon!” says Artistic Director Derryl Yeager. “Now in its 26th year, it has grown tremendously in popularity.

Get your tickets early, before the Company closes its doors forever! This show has it all – frights, amazement, scares and lots of laughs. Come and join this spectacular Halloween tradition and see what everyone is talking about – Odyssey Dance Theatre’s Thriller!

Critics agree that Odyssey Dance Theatre is nothing short of spectacular:

“Odyssey’s production of “Thriller” was truly a thrill for the audience, which was at times breathless with laughter, at times fearful and amazed, but always totally entertained. The pieces were excitingly choreographed and energetically performed…” – Margaret Godfrey – Salt Lake Tribune

“Odyssey’s “Thriller”… a delightful “Danse Macabre”… As for humor, there were bucket-loads. Laughs abounded during a “Romeo & Juliet”-inspired “Frankenstein & Frankenstein” and “Jason Jam,” a work that used a lot of percussive dancing, a la “Stomp,” that spotlighted three “Friday the 13th” villains dancing with ice picks, machetes and, of all things, chain saws. The whole idea was cool…”     – Scott Iwasaki – Deseret News