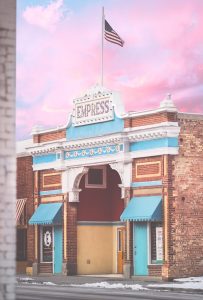 The Empress is proud to introduce its successful Youth Theatre Program "MUSIC EXPLORERS"!! A workshop and performance experience for children ages 6-12!

This session is dedicated to a fun, original musical "UTAH EXPLORERS". The Explorers curriculum is a high-spirited, educational program meant to engage children through fun music and acting experiences. There will be two performances at the end of the session, open to the public, free of charge.

Every student will be given a named role with lines and/or a solo!

REGISTER BY 4/14 either online at www.EmpressTheatre.com (in the EZ Tickets link) or by cash/check to the box office.

Email to empress@empresstheatre.com if questions!

Our story follows Marco and Amelia who are trapped in a dusty, old Utah museum. They learn that Utah has a rich, diverse history that spans from the time of the Ancient ones to the settlements by other Native American groups, traders, Mormon pioneers, and many other groups through time.

MARCO – Forced to come on vacation to Utah with his family in the dead of winter.

AMELIA – Younger sister of Marco. Also not very excited about their vacation.

MOM – Marco and Amelia’s mom. Very excited to be there.

DAD – Marco and Amelia’s dad. Also very excited to be there.

“THE ANCIENT ONE” – Representing the Anasazi and Freemont Indians.

ISABELLA FORSYTH – Representing the Pioneers and the pioneering spirit.

THOMAS FORSYTH – Representing the Pioneers and the pioneering spirit.

MARY JANE DILWORTH –Representing the settlement and growth of Utah – first school teacher in the state of Utah.

BRIGHAM YOUNG – Representing the celebration of Statehood. The first Territorial Governor of Utah.

GAMESHOW HOST – A host of the fictional game show “Who is the Best Mountain Man of Them All Today?”

In the past we were able to provide parking on the west side gravel lot, the new building owners have asked that our patrons no longer park there. While we have never had any patron cars towed, it is possible. The green areas on the map below represent street parking and parking lots on Magna Main Street that are free to use.