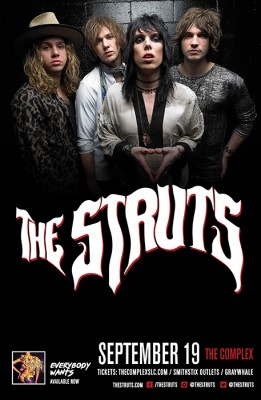 Before even releasing their first album, U.K.-bred four-piece The Struts opened for The Rolling Stones in front of a crowd of 80,000 in Paris, got hand-picked by Mötley Crüe to serve as the supporting act for their four last-ever performances, and toured the U.S. on a string of sold-out shows that demanded the band move up to bigger venues to accommodate their fast-growing fanbase. Now with their full-length debut Everybody Wants, lead vocalist Luke Spiller, guitarist Adam Slack, bassist Jed Elliott, and drummer Gethin Davies reveal the supreme mix of massive riffs and powerfully catchy melodies that’s already slain so many adoring audiences around the globe.

“Every time we go into the studio we just want to channel exactly what we’re all about onstage—something big, fun, unapologetic, rock & roll,” says Spiller. “We love a song that makes everybody sing along, and touring quite extensively over the past few years has given us a lot of inspiration to bring that kind of energy to our album.”

The follow-up to Have You Heard—a 2015 EP whose lead single “Could Have Been Me” hit #1 on Spotify’s viral chart, earned more than 2.5 million Vevo/YouTube views, and shot to the top 5 on Modern Rock radio charts—Everybody Wants unleashes anthem after arena-ready anthem. Pairing up with producers like Gregg Alexander (former frontman for New Radicals) and Marti Frederiksen (Aerosmith, Mick Jagger) and recording in such far-flung locales as a refurbished London church and a studio in the Spanish region of Andalucía, The Struts prove the iconic power that’s prompted Yahoo Music to name them “one of the most exciting and electric performers in rock today” and MTV to proclaim the band “well on their way to bringing rock & roll back to the forefront.”

Throughout Everybody Wants, The Struts offer their own undeniable twist on sweetly sleazy glam-rock, delivering huge hooks and making brilliant use of Spiller’s otherworldly vocal range. Even the album’s breakup songs come on full throttle, with “Mary Go Round” backing its dreamy acoustic balladry with heavy drums, blistering guitar work, and fantastically glam-minded lyrics (“I can’t even pour myself a glass of wine/Because every glass is stained with your lipstick shine”). Also evidence of The Struts’ romantic sensibilities, the sweeping, heart-on-sleeve intensity of “A Call Away” offers a stirring testament to love against the odds. “It’s about when I’d just moved to America and had a girlfriend back home, and everyone was asking how I was going to make it work,” explains Slack. “The song’s saying that we’ll make it work no matter what, no matter how many miles apart we are.”