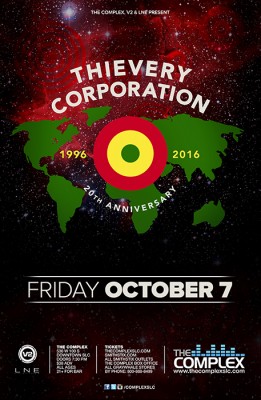 When they met in the mid-1990s, Thievery Corporation’s Eric Hilton and Rob Garza instantly bonded over their shared passion for bossa nova. Dedicating their 1996 debut ‘Sounds from the Thievery Hi-Fi’ to bossa nova pioneer Antonio Carlos Jobim, the Washington, D.C.-based duo have spent nearly two decades creating boundary-warping, complexly crafted electronic music partly inspired by bossa nova’s intricate rhythms and lush textures. Now, with their seventh studio album ‘Saudade,’ Thievery Corporation present their first release devoted entirely to the Brazilian-born genre that first connected them. “We always try to progress into something different and stretch our musical chops, and taking a whole album to dive into this one sound seemed like a really great way to do that,” says Hilton. Adds Garza: “It’s a bit of a departure for us, but at the same time these are our roots, this is what brought us together. It’s us coming full circle from electronic music back to something organic before we move on to our next chapter.”

Released on their own label ESL Music, ‘Saudade’ borrows its title from a Portuguese word meaning “a longing for something or someone that is lost, a contented melancholy, or, simply, the presence of absence.” “Saudade is the essence or feeling of true bossa nova,” explains Hilton, who names “those warm, soulful, melancholic vocals” as one of the elements of bossa nova that’s most alluring to him. Drawing influence from classic Brazilian performers like Antonio Carlos Jobim, Gal Costa, and Luis Bonfa, along with Serge Gainsbourg, Ennio Morricone, and more modern artists like electro-samba pioneer Isabelle Antena.Saudade achieves its delicate yet deeply sensuous sound with the help of more than a dozen guest musicians. With each track sung by one of five female vocalists (including longtime Thievery cohort LouLou Ghelichkhani, newcomer Elin Melgarejo, Nouvelle Vague singer Karina Zeviani, Argentine chanteuse Natalia Clavier, and former Bitter:Sweet singer/songwriter Shana Halligan), the endlessly mesmerizing album also features such guests as U.N.K.L.E. drummer Michael Lowery, Argentine singer/songwriter Federico Aubele, and master Brazilian percussionist Roberto Santos.