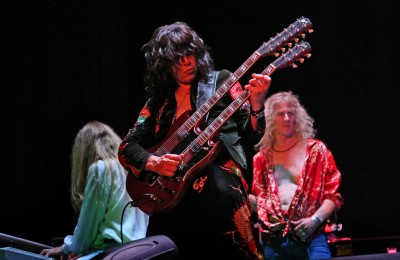 Presented by The Depot at The Depot

Taking to the stage in venues across the country, ZoSo brings a passion and experience level that is immediately seen and felt. Their winning approach led them to their best year ever in their long history in 2015–as time goes on, the members of ZoSo seem to get closer to embodying the role they are playing, matching the sounds, moves and attitude of Led Zeppelin in their heyday.

ZoSo was founded over 21 years ago, when lead singer Matt Jernigan was at a crossroad in his musical career. Well-known for his vocal prowess, he didn’t want to go in the heavier, growling direction that metal had veered toward. It was while he was considering his next move that a few trusted industry friends swore up and down that he would be a natural doing Robert Plant in a Zeppelin tribute.

Convinced to give it a shot, Jernigan assembled a talented trio of players to form the first ZoSo lineup, and they quickly caught on in many markets, including Los Angeles, Dallas, Atlanta and Denver.

In the ensuing years, ZoSo has developed a strong and loyal following throughout the U.S. and played in several international markets in South and Central America and East Asia.