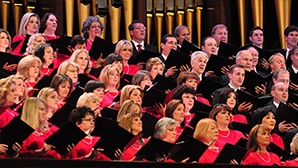 The Tabernacle Choir at Temple Square

For more than a century, The Tabernacle Choir has given voice to the hopes, joys, trials, and triumphs of people around the world.

This 360-member chorus of men and women, all volunteers, has performed at World’s Fairs and expositions, at inaugurations of U.S. presidents, in acclaimed concert halls from Australia and Europe to Asia and the Middle East, on television broadcasts, and now on YouTube and Facebook. The choir has even been referred to as “America’s Choir,” as a result of their high standard of popular choral music.