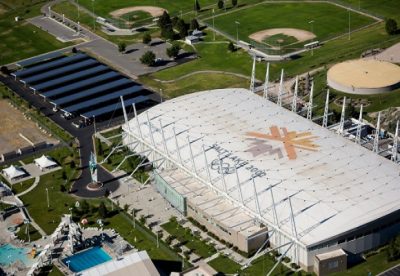 The Utah Olympic Oval was built with the purpose of hosting speed skating competitions during the 2002 Salt Lake Olympic Winter Games, but serves as a legacy to the State of Utah for all members of the community to enjoy. The Oval, as well as the Utah Olympic Park in Park City, is operated by the Utah Athletic Foundation. The Oval is part of a multi-purpose recreation complex that includes recreational gyms, weight facilities and swimming pools. With an incredible 10 Olympic records and eight world records, the Utah Olympic Oval stands uncontested as the “Fastest Ice on Earth” following the 2002 Olympic Winter Games. As impressive as the record breaking performances were, it was the performance of the U.S. Olympic Speed Skating Team during the Games that has generated a worldwide “buzz” surrounding the Utah Olympic Oval. The team relocated to Salt Lake City in January of 2001 to begin training in the Olympic venue 12 months before the rest of the world was expected to arrive. At the end of the 2002 Games, the U.S. Speed Skating team had garnished an astonishing eight Olympic medals won by six individual team members. Hours: Monday, Wednesday, Friday 5:30am-10:00pm, Tuesday, Thursday, Saturday, Sunday 8:00am-10:00pm