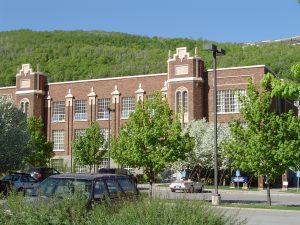 The Park City Library, for many the heart of Park City, is the result of many, many years of community effort. Back in September 1888 the Park Record reported, “Miss Lizzie Barbee has been appointed librarian for the Ladies Library Association library.” Park City had a library before Utah had statehood! In February 1889 the Park Record listed the 82 new books the library had received. This first library was created in a room in the basement of the Congregational Church and was open to all who wanted to use it. When the City opened its own library the books and furnishings were donated to it. The Congregational Church, which became the Park City Community Church in 1919, was located at 402 Park Avenue. The church building, now a private residence, is listed on the National Register of Historic Places.