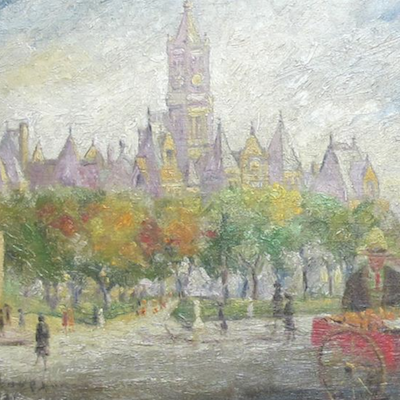 Frank Ignatius Seraphic Zimbeaux was born in Pittsburgh, Pennsylvania. He was a prominent impressionist painter, a poet, and a photographer. Zimbeaux was raised in an orphanage operated by an order of Catholic monks who encouraged his artistic abilities. While still a young man, he went to Europe to pursue art studies. He opened a studio on the left bank of Paris and became acquainted with many of the artists living there at the time, including Henri Mattisee. It was in Paris that Zimbeaux met Henri Moser, and impressionist painter from Utah who was also studying in Paris at that time. He arrived back in the United States in 1914, lived in New York and the Carthage, Missouri. In 1924, he decided to move west to join impressionist painter Henri Moser, who had purchased a ranch in the Malad, Idaho area. Salt Lake City would eventually become Zimbeaux’s permanent home. Zimbeaux’s son Francis also became an artist.