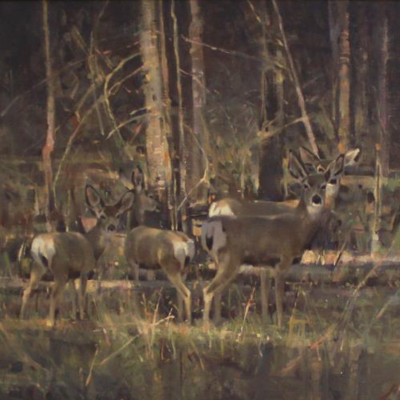 Utah native James Morgan studied art at Utah State University, earning a BFA in 1970. Morgan resides in Mendon, Utah and much of the subject matter in his work comes from the wilderness areas in and around Cache Valley. His work has been exhibited in the Prix de West Invitational at the National Cowboy & Western Heritage Museum, the Northwest Rendezvous Group, and the Artists of America Show in Denver. Morgan has received many prestigious awards, including the 1994 Robert M. Lougheed Memorial Award at the National Academy of Western Art in Oklahoma City, and the Red Smith Artists Choice Award in 1996 at the National Museum of Wildlife Art in Jackson, Wyoming.