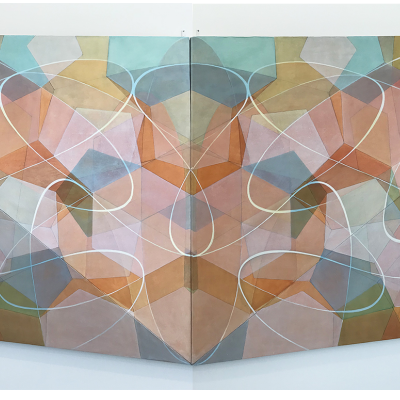 “Symbols and Symmetries,” is a four-part, linen over wood, charcoal and oil painting. The work’s origin is directly related to geometric forms which denote aspects of visualizing issues within the Life Sciences. Here, I have integrated the hexagon and pentagon, which are symbols utilized by scientists to identify cell structures. Accompanying that is the repetitive arching form; acting as a unifying lyrical, linear element and emblematic of the dynamic notion of chance, change and the ever-present and potent biological and human act of creativity. The three-dimensional form of the painting structure coupled with the symmetrical composition relate to scientific cloning and the notion of the Rorschach ink fold as an implied physical act of cloning; ushering the artwork metaphorically into a dynamic flex or fold which seems to slightly compress and expand as one moves past the piece.

Through these processes, I have attempted to create an artwork, which speaks directly to this site. Not only in the physical characteristics of the piece, but also in the desire to become one with its environment and to function in harmony with its inhabitants; with the additional goal of not only one of beauty, but also one of wonder. Exposing the viewer to the fundamental human inventions of mathematics and more specifically, geometry, as a vehicle and metaphor which enables us to better understand the mysteries, complexities and splendor of our magnificent ever-changing and dynamic, natural world.
View more from the Utah Public Art Program here: https://artsandmuseums.utah.gov/public-art-collection/