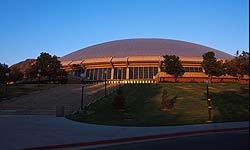 Regarded as one of the top college arenas in the nation since opening its doors in 1969, the Jon M. Huntsman Center has provided an imposing advantage for Utah teams. For a structure that is beginning its 35th year of existence, a feeling of newness still pervades underneath the silver dome. As serene as the Huntsman Center may look empty, when the Utes are on the floor and fans are in the stands, the place transforms into a madhouse. Both the Utes basketball teams and gymnastic teams bring on the action in the Huntsman Center.