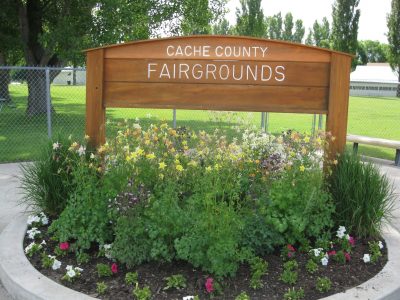 The Fairgrounds have been used in a variety of ways over the years. The Cache County Chamber of Commerce sponsored a rodeo in the fall of 1922. In the 1930s the area was a host to exhibition dog races. Baseball was played on the four diamonds and lighting was added to allow for night play. The northwest area of the Fairgrounds was turned into a prisoner of war camp in 1945 at which time several new buildings were built. The POW camp existed until the fall of 1946. In 1953 a turkey shoot was organized. The Lennon Sisters performed at the Fairgrounds on May 15, 1962 and the Carson and Barns Circus first came to Logan in April of 1965.
The Fairgrounds is used for horse shows, family reunions, Cache Valley Cruise-In, trailer groups, rodeos, demolitions derbies, and of course the Cache County Fair.

The site of the Cache County Fairgrounds is located within the City of Logan. It is bordered on the north by 400 South (Residential), the east by 400 West (Residential), the south by the Willow Park Zoo, and the West by 500 West (Park and Swimming Pool Complex). The Fairgrounds covers approximately 48 acres of land primarily covered with “softscape”. The landscape includes large grass areas with mature deciduous trees, parking areas within the racetrack that are not paved, asphalt roadways, and parking areas. In addition, there are two water features located on the site. Flowing water via a north/south canal that divides the site and a “pond” that collects runoff and groundwater. There are views of the surrounding mountains and the character of the Fairgrounds is very park-like.

This venue available for rent :