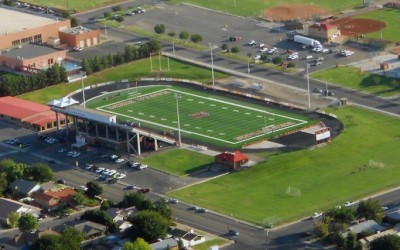 Home of Dixie State University football and soccer, Greater Zion Stadium (formerly Trailblazer Stadium/Hansen Stadium) has played site to numerous Dixie State memories since its construction in 1985. It hosted classic junior college rivalry games over the years and was the site of the Dixie Rotary Bowl until 2008. The stadium was built to a donation at the bequest from the George T. Hansen Foundation – a charitable foundation in Salt Lake City, who gives money to school related activities. The Stadium features the Hansen Grandstand on the west side that seats 6,500 fans. The newly renamed Greater Zion Stadium, home to Dixie State’s football and men’s and women’s soccer programs, has seen the completion of the first stages of a new renovation project with installation of a new football/soccer field and a new state-of-the-art track surface. In addition, the new east grandstands, with more than 4,000 additional seats, will be completed in time for the University’s 2018 Commencement Ceremonies.