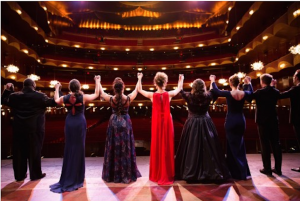 Young opera singers from around the United States, Canada, Puerto Rico, and Mexico, will compete for $15,000 cash prizes and the opportunity to kick off major operatic careers, when the Met’s National Council Auditions launches its 66th annual auditions program this fall. Over 1,000 singers between the ages of 20 and 30 will participate in the National Council Auditions, the longest-running singing competition in the country. Aspiring singers who hope to become 2019-20 Metropolitan Opera National Council Auditions Winners must compete in four rounds of auditions culminating on the stage of the Met at the Grand Finals Concert on Sunday, March 1, 2020. The first level of the competition will be held in 40 Districts throughout North America, including the Utah District Auditions.

The Utah District entry level auditions will be held on November 9, 2019 in the Libby Gardner Concert Hall on the University of Utah Campus from 11:00AM to 1:00 PM and 2:00 to 5:00PM and are open to the public to observe free of admission charge. The winner(s) of the Utah District will compete in the Rocky Mountain Region Auditions on January 26, 2020. Approximately 20-25 first place winners from the regions throughout North America receive a cash prize and will be sponsored to go to New York in February for the National Council Auditions Semi-Finals on the Met stage. Up to 11 singers will then compete at the National Grand Finals Concert on Sunday, March 1, 2020 on the Met stage, accompanied by the Metropolitan Opera Orchestra. Approximately four to six singers will be named National Council Auditions Winners, each receiving a $15,000 prize and invaluable career-making exposure.

Members of the Met’s artistic staff and other professionals from the opera world judge the auditions and give each singer feedback through all levels of the competition, which includes career advice and ideas on future engagements. The judges for the November 9, 2019 Utah District Auditions will be American bass opera signer Morris Robinson, Houston Grand Opera Studio Music Director and Rice University Director of Opera Studies Michael Heaston, and Portland Opera Director of Artistic Operations Clare Burovac

Hundreds of volunteers across North America help the Met organize and fund the National Council Auditions in their respective Districts and Regions. They also help the Met raise nearly $500,000 in prize money that the National Council Auditions awards annually at the District, Regional and national levels of the competition. The 2019-20 Utah District Auditions are supported in part by the residents of Salt Lake County through the Zoo, Arts & Parks (ZAP) Program, the Salt Lake City Arts Council, the Arts, Culture, and Events (ACE) Fund administered by the Salt Lake City Mayor’s office, and contributions from private individuals.

The National Council Auditions are seen as a major step on the road to an international career in opera. Past winners include some of world’s best-known opera stars, including Renée Fleming, Susan Graham, Thomas Hampson, Ben Heppner, Jessye Norman, Susanna Phillips, Teresa Stratas, and Frederica von Stade. On average, nearly one hundred alumni of the National Council Auditions will be seen in Met performances each season.