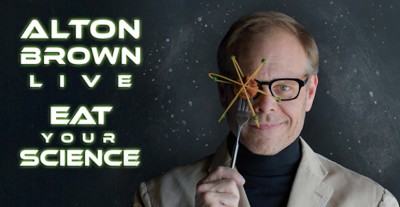 “Alton Brown Live: Eat Your Science” (www.altonbrownlive.com), the follow-up to the smash “Edible Inevitable” tour, will hit the road in 2016. Fans can expect all-new everything including songs, multimedia presentations, talk-show antics, and bigger and better potentially dangerous food demonstrations.

Brown has a knack for mixing together a perfect base of science, music and food into two hours of pure entertainment. Critics and fans alike have raved about the interactive components of Brown’s shows. He promises “plenty of new therapy inducing opportunities during our audience participation segments. I don’t want to give too much away, but this time we’re going to play a little game while we’re at it. Plus, you’ll see things I’ve never been allowed to do on TV.” He’s also contemplating more sophisticated protective gear for folks in the first few rows…just in case things get messy…again.