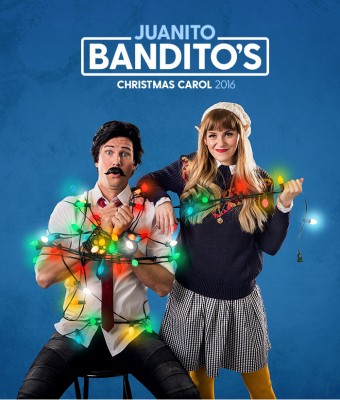 It’s Christmas Eve-Eve when Juanito Bandito finds himself stranded in an ancient Western town inhabited by a quirky band of North Pole elves with a secret to keep. When he learns about a certain “Man Up North” making gifts for millions of good boys and girls he comes up with a plan to pull off the biggest heist in holiday history! Will Bandito put an end to Christmas as we know it or will visits to his past, present and future be enough to convince him that he’s not as bad as he thinks?

Written by Pickleville’s own TJ Davis, “Juanito Bandito’s Christmas Carol 2016” features a cluster of zany characters, several toe-tapping holiday tunes and Bandito’s hilarious brand of improv and musical comedy. It’s a heartwarming holiday tale that’s sure to create a lasting memory for the people you love the most. Join the tens of thousands that count Juanito Bandito as their most anticipated Christmas tradition!