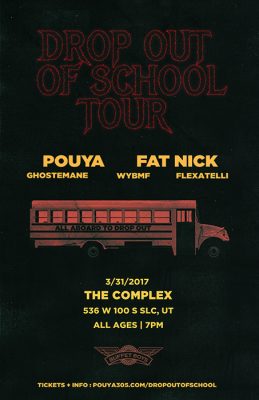 Born and bred in Miami, Florida, Kevin Pouya certainly does not look the part of your everyday rapper; but little be known, is he not just some wannabe who spends his time passing out his totally lit, extremely fire mix tape outside of McDonalds. Since discovering his artistic capabilities at the adolescent age of 17, Pouya has divulged four mix tapes as well as his debut full-length album Underground Underdog, which was released late April 2016 and reached #2 on the iTunes Top Hip Hop Albums chart sitting right behind Drake. Pouya’s UU brings forth an intricately crafted, malleable voice that will span multiple musical territories over the years to come. Following an immensely successful spring tour, Pouya was accompanied alongside $Uicideboy$, not to mention he dropped a new EP for free download entitled South Side Suicide.

Over the course of this past year, Pouya has been hard at work bangin’ out fresh beats and collaborating with artists like Getter, Fat Nick, Ying Yang Twins, and many more. His age may appear deceiving, but this kid spits straight 90s hip-hop and Memphis fire, ruling the reigning mayhem that Pouya is just getting started. Amidst Pouya’s multi-faceted rap skills, he is one of those artists who completely let’s his personality shine through, solidifying any Pouya show as a divergence from an atypical hip-hop/rap show. From here on now out, get ready to hear a lot more of brand new Pouya as the Miami-native preps to take the country by storm. Pouya is destined to be a defining catalyst in engineering a concrete path where hip-hop, rap, and electronic music can sustain their newfound ability to coexist in the world of ultramodern music – no matter which multifarious genre you come from. – See more at: http://www.thecomplexslc.com/event-1304.htm#sthash.UqvCdh6V.dpuf