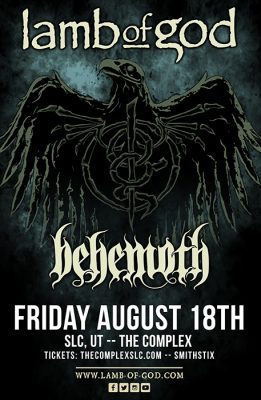 For all its depth, diversity and cross-pollinated ambition, modern metal needs its figureheads, its heroes and its leaders. Lamb of God have been blazing mercilessly away at the forefront of heavy music for the last 15 years, upholding metal’s intrinsic values of honesty, intensity and creativity while also daring to push boundaries and think outside the heavy box. Exploding into view with 2000’s seminal debut New American Gospel, the Virginian quintet inadvertently kick-started the so-called New Wave Of American Metal at the dawn of the 21st century; and have notched up a succession of huge commercial hit albums and remorselessly toured the globe ever since. The combination of vocalist Randy Blythe’s excoriating growls and roars, guitarists Willie Adler and Mark Morton’s precision attack and the bowel-shattering rumble of rhythm section John Campbell (bass) and Chris Adler (drums) has both refined and redefined the notion of aggressive metal in the modern era.

From the raw savagery of 2003’s As The Palaces Burn and its immaculate follow-up Ashes Of The Wake in 2004 to the widescreen pomp and melodic intricacy of Sacrament in 2006, the band’s rise to glory was steady and unstoppable. By the time they released Wrath in 2009, Lamb of God were simply one of the biggest metal bands on the planet, with a vast army of fans worldwide and a formidable reputation for delivering the goods on stage, with countless headlining tours and festival appearances contributing to their status as standard bearers for heavy music. 2012’s Resolution album marked a startling evolution in the band’s sound, displaying laudable levels of experimental fervour and sonic breadth. It built upon the successes of previous years by smashing into the US Billboard charts at number 3 and looked to usher in a new era of acclaim and achievement.

Of course, what happened next is well documented. Vocalist Randy Blythe’s trials and tribulations in the Czech Republic – wherein he stood accused of causing intentional bodily harm to a fan at an LOG show in Prague in 2010 and faced a lengthy prison sentence – momentarily threatened both his freedom and the future of his band. Eventually acquitted on all charges, Randy has spoken at length on his experiences and while it would be inaccurate to state that the new Lamb of God album – VII: Sturm und Drang – represents the story of those dark days, it undoubtedly had a huge impact on the lyrical direction that he took this time round.