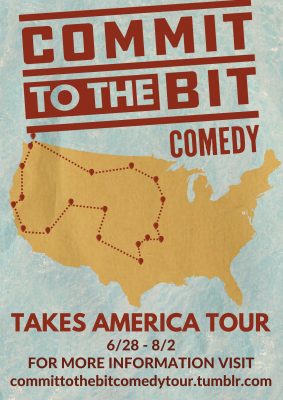 Commit to the Bit Comedy Tour

Presented by Commit To The Bit Comedy at Unknown

Commit To The Bit Comedy brings 2 of Chicago’s most unique comedy voices together. Tyler Ross and Dylan Scott have entertained audiences across the United States and Canada. Dylan and Tyler met when they both responded to the same internet listing for an apartment. Shortly after they began hosting open mics together developing a duo hosting style best described as “sibling bantering that I really enjoyed”. The two have gone on multiple DIY comedy tours, doing shows in bars, art galleries, houses, hostels, comedy clubs, etc.