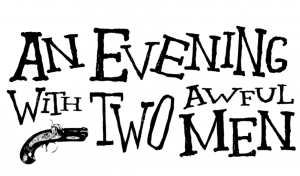 An Evening With Two Awful Men

“I guarantee you there will come a time when your name won’t ring a bell among the living.”

From the author of RIVER.SWAMP.CAVE.MOUNTAIN., BASED ON A TRUE STORY & MARRY CHRISTMAS

Recommended for ages 12 and up. No babes in arms. All patrons require a ticket regardless of age.