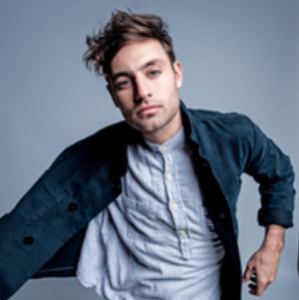 “A ‘yoke’ is something that holds things together. ‘Lore’ means a set of stories or a collection of ideas about an event, time, or culture,” explains Adrian Galvin, when asked about the meaning behind his musical moniker Yoke Lore. New York indie pop project Yoke Lore is the solo musical venture of Adrian Galvin, previously of Yellerkin and Walk the Moon. Yoke Lore layers the harmonies of Panda Bear, the soulful beats of M83, and the modern pop of Blackbird to tell “the stories of how we are bound.” Galvin’s songs combine echoing waves of banjo, vocals, and percussion to create arresting pop music with tactile candor and conviction. Galvin continues, “I want to tell stories about how memories, relationships, apprehensions, and big dreams hold us together. I think that exploring universal experiences both emotional and spiritual are best conveyed through the potency of personal stories. And music wields a power to render the very personal, epic.”

After putting out three acclaimed EPs which gained him a loyal following — Far Shore (2016), Goodpain (2017), and Absolutes (2018) — 2019’s Meditations strips several of Galvin’s familiar songs to their core by trading the usual electronic elements for arrangements of piano, horns, and strings. “In re-interpreting it, I wanted to clear out everything but the song itself, so that people to whom it means something can glean a more refined experience of the song itself. Clear out the clutter, unburden yourself,” Galvin explains of “Beige (unburdened),” the reimagined version of his song “Beige” from the Goodpain EP. In addition to these re-interpretations, listeners will also find two new studio songs on the new Meditations EP.

2017, the year the Goodpain EP was released, was a turning point for Yoke Lore. His stand-out single “Goodpain” roused fans old and new — including Spotify, who invited Galvin to their New York City studio to record an acoustic version of the track, as well as two covers for his Spotify Singles: “Last Christmas” by Wham! and “Truly Madly Deeply” by Savage Garden. His holiday song graced Spotify’s Holiday Singles playlist alongside covers by Demi Lovato, Sam Smith, and Miley Cyrus. Yoke Lore also found an unexpected new fan in popstar Taylor Swift, who added his cover of “Truly Madly Deeply” to her “Songs Taylor Loves” Spotify playlist in 2018.

Three years of non-stop touring (supporting acts like Bastille, LP, Frenship, Overcoats, The Pains of Being Pure at Heart, and Aquilo) and playing festivals worldwide (SXSW, The Great Escape, Field Trip, Billboard Hot 100) led to Yoke Lore’s first US headline tours, selling out shows all over the country. In 2019, Yoke Lore will make appearances at BottleRock Napa Valley and Firefly Festival, following an east coast headline run and some European dates as well.

The new acoustic EP, Meditations, is due out June 2019.