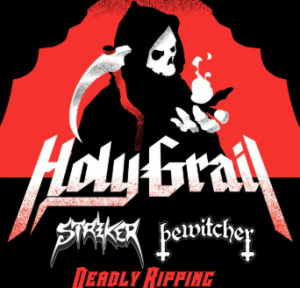 Do you remember when you could put on a metal record and be able to tell who it was just by the way it sounded? Remember the last time you heard a metal song that not only did you need to find out who was playing it, but you were desperate to hit “repeat” on your player? Can you recall the last time you wondered if the guys in the group were as good looking as they sounded coming through the speakers? If the answer to those questions is “no” followed by a tear…dry those eyes. Your salvation is here and its Fast, Loud, and RUDE.

Rob Gray (vox, lead guitar) and Garrett Gridley (vox, lead bass, Moog Tarus) have come together to form a group that has brought refreshing sound and loads of talent to the SLC music scene. There’s a word that bears repeating: talent. From clever and powerfully delivered lyrics to face melting guitar riffs, this band brings it and leaves you wanting more. There are no gimmicks here. Just a couple of guys who love what they do and are very good at it.

If you’ve been lucky enough to catch them ToxicDose has played with such touring bands as Exodus, Death Angel, Nevermore, Toxic Holocaust, Municipal Waste, and 3 Inches of Blood. They were a featured act at the 2010 Salt Lake City Metal Fest and have regular play time on KRCL 90.9’s Maximum Distortion. ToxicDose merchandise can be found at The Heavy Metal Shop.

Welcome to ToxicDose. There are other bands out there, but in this world of fast food, disposable toilet cleaners, and fax machines who has the time to listen to anything but the best?

…this is thrash metal at its best.