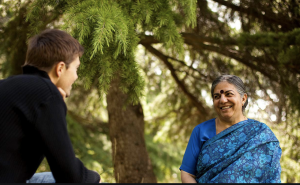 A Quest for Meaning tells the story of Marc and Nathanaël, two childhood friends who take an impromptu road trip attempting to uncover the causes of our current global crisis and to discover a way to bring about change. The two friends invite us to share their quest as they meet with activists, biologists, philosophers, and custodians of ancient traditions. Equipped with nothing more than a tiny camera and a microphone they document some of the solutions that are laying the foundations for a sustainable world. This life-changing journey restores confidence in our ability to bring about change both within ourselves and in society.