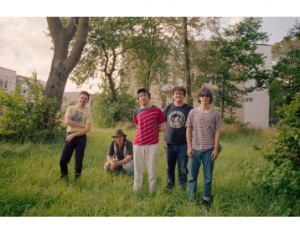 Twin Peaks are coming to Metro Music Hall with Post Animal + Ohmme, 11/5/19! Chicago’s Twin Peaks have gleefully embraced change ever since their 2010 formation to become one of the city’s most essential rock bands. With their fourth album Lookout Low, the sonic and creative leap the five-piece takes feels like a total revolution in their youthful sound. The 10-track effort was recorded and cut live over three weeks in Wales with legendary producer Ethan Johns. Thanks to the band’s dedicated approach to rehearsing and demoing out their material before hitting the studio, the songs burst with life and the undeniable magic of their live show. 2016’s Down In Heaven connected with audiences in a big way, seeing the band taking over late night on CONAN, while landing festival slots at Lollapalooza, Bonnaroo & Coachella, and tours supporting luminaries like Spoon, Cage The Elephant, and Wilco. Armed with four excellent and collaborative songwriters, each member upped their game on Lookout Low. Guitarist Cadien Lake James’ mind-bending opener “Casey’s Groove” is expansive and reassuring, bassist Jack Dolan’s “Unfamiliar Sun” is patient and affecting, guitarist Clay Frankel translates heartache into catharsis on the title track, while multi-instrumentalist Colin Croom reaches new performing heights on “Ferry Song.” Lookout Low shows that Twin Peaks is less a band and more a brotherhood, one that’s endured for almost a decade.