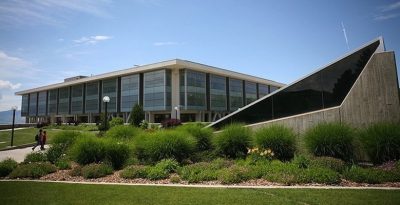 Donna L. Poulton is the Curator of Utah and Western Art at the University of Utah's Museum of Fine Arts. She grew up in Dillon, Montana and lived in Germany for twelve years where she studied at the Boston University extension in Stuttgart and later received her Ph.D. from Brigham Young University. She has juried and curated many exhibitions, including the Olympic Exhibition of Utah Art.

In Poulton’s recently published book, LeConte Stewart Masterworks (Gibbs Smith, 2013), coauthored with James L. Poulton and Vern Swanson, she traces the works of Utah artist LeConte Stewart (1891–1990) who created images of Utah and the West. His farms, deserts, and urban landscapes capture a region and an era. Influenced by John Carlson, Maynard Dixon, and Edward Hopper, Stewart is a valued and important voice in this period of American art. Stewart spent much of his early life in the shadows of the iconic natural splendors of southern Utah. But it was small- town life in Davis County and the surrounding farms and urban landscapes that captured his imagination. Though he studied with a number of important American artists, he internalized the technique and philosophy of John Carlson. He later passed this on to his students while he was chair of the Art Department at the University of Utah. This long-awaited volume includes more than 300 paintings, many never before seen or brought together in one work.

Dr. Poulton has taught Utah art history at the University of Utah, lectures throughout the state and has served on the boards of numerous arts organizations. She has produced commercial videos on Utah art and consulted with private art collectors and galleries and written articles on Utah and Western Art for Fine Art Connoisseur and Western Art and Architecture magazines. She is the co-author of Utah Art, Utah Artists, and Painters of Utah's Canyons and Deserts and is the sole author of Reuben Kirkham: Pioneer Artist released in 2012. Her new book on the History of Painting in the Tetons will be released in 2014 and Painters of Utah's Mountains and High Plateaus will be released in the fall of 2015. Donna is co-owner of the newly opened art gallery, Modern West Fine Art, located at 2nd and 2nd in downtown Salt Lake City.