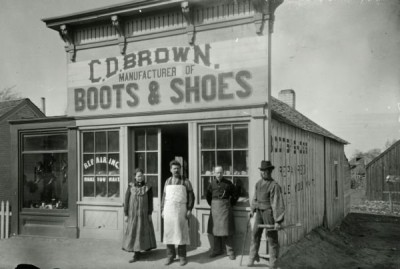 Come explore Brigham City’s historical buildings through photographs from 1900, presented side-by-side with photographs of the same locations from Spring 2016.

Folks that lived by the rising and setting of the sun built homes, shops, churches, and a railroad depot after they arrived 165 years ago in the Box Elder Creek area, known today as Brigham City. Fifty photographs that document the pioneers’ accomplishments through 1900 are presented in the exhibit Building History II set for March 30 through June 8 at the Brigham City Museum of Art and History. Like the museum’s exhibit Building History in 2013, most of the photos were taken by an unknown photographer.

Narratives communicated in the photos show a town prospering over the years. Successful ventures were a driving factor in Brigham City’s home-building rush of the 1890s coupled with the arrival of electricity and a pressurized city water system. Images of homes in the exhibit range from simple (and sometimes unfinished) log and adobe dwellings to brick, Mansard- and Victorian-style houses. Some of them that lined the streets are still standing, specifically the home built by Mayor Adolph and Mary Madsen at 105 North 200 West and the home built by Carl and Celia Isaacson at 722 South 700 West, currently owned by David and SharaLee Harrison.

Also pictured in the exhibit is the city’s depot for the Ogden Short Line Railroad, which was replaced by the current depot.

In the spring, Museum Director Kaia Landon challenged members of the Northern Utah Camera Club to locate and then photograph the current site of each historic image. Club President Barry Parsons of Wellsville coordinated the shoot. The photos are hung side-by-side in the gallery.

Artifacts that are a reminder of the spirited people that rallied in the Great Basin are also on display.