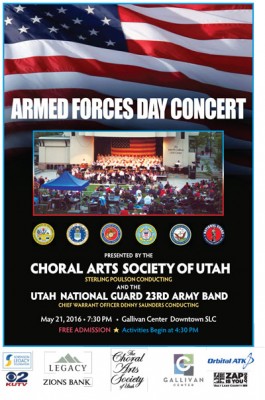 Presented by Choral Arts Society of Utah at The Gallivan Center

SALT LAKE CITY – Music Director Sterling Poulson and the Choral Arts Society of Utah invite you to an evening dedicated to honoring our men and women in the Armed Forces. This is a free concert and no tickets are required!

SALT LAKE CITY – Music Director Sterling Poulson and the Choral Arts Society of Utah invite you to an evening dedicated to honoring our men and women in the Armed Forces.  This is a free concert and no tickets are required!

The evening entertainment begins at 4:30 P.M. with a performance by Donner Pass, followed by the 23rd Army Band Rock Band (Article 15) performing at 5:30 P.M.  The concert starts at 7:30 P.M. when the Utah National Guard 23rd Army Band, Denny Saunders, commander takes the stage with the Choral Arts Society of Utah and a special appearance by the JHS Bell Choir from Lehi, Utah. This amazing concert will include a variety of music including the patriotic favorites you love to hear, and ends with a spectacular fireworks display as the band plays John Philip Sousa’s Stars & Stripes Forever.   Bring your family and enjoy plenty of food, fun and support service booths along with the great entertainment.  Being honored at this concert are members of the Utah Air National Guard who received awards in 2016.
The 23rd Army Band has played for Presidents, Senators, Congressmen and Heads of State.  Each year the Band performs for thousands of people across the State of Utah and the United States, giving clinics and concerts for schools, performing at civic functions, marching in parades, and providing music for military dances, changes of command, and pass-in-reviews.  The Rock Band, Article 15 will take you back to whatever generation you are from and consists of 2 guitar players, a bass guitar player, keyboard player, percussionist and vocalists.
Whether you’re an old-timer who was there back in the 50’s & 60’s listening to Hank Williams Sr. or Buck Owens, or even a young’un diving through your grandpa’s record collection of Merle and Waylon, the music of Donner Pass is sure to bring a smile to your face. We take pride in presenting to you the country western music of that era with as much authenticity and care as a band can give. Donner Pass may be a bunch of young bucks, but they have a love for the music that transcends age. Come and see what all the whoopin’ and hollerin’ is about!

Now in its 30th year, the Choral Arts Society of Utah Master Chorale’s 100-voice mixed choir is based in Salt Lake City, and recently won the silver medal award at the Sing-n-Joy Choral Competition in Provo, Utah. Many of their performances are benefit concerts for schools and organizations providing humanitarian services to local areas.  See a complete listing of the choir’s upcoming performances at www.casu.org.