mewithoutYou:
It is no mistake that mewithoutYou have become one of today’s most fascinating experimental rock acts. The last 15 years have borne witness to the Philadelphia five-piece exercising stylistic evolutions and aerial dynamics with humbling dexterity and untamed ambition. At their roots may be a theatrical progressive punk/post-hardcore band, but they’ve never been content to remain comfortably within a familiar genre. Their continuous

mewithoutYou:
It is no mistake that mewithoutYou have become one of today’s most fascinating experimental rock acts. The last 15 years have borne witness to the Philadelphia five-piece exercising stylistic evolutions and aerial dynamics with humbling dexterity and untamed ambition. At their roots may be a theatrical progressive punk/post-hardcore band, but they’ve never been content to remain comfortably within a familiar genre. Their continuous multi-directional movements have left them increasingly difficult to classify, the growth of their branches impossible to predict. The group’s sixth full-length album, Pale Horses, is the best evidence to date of their eclectic agility.

The one constant in mewithoutYou’s storied career has been lead singer Aaron Weiss’ ability to sketch ornate, thought-provoking narratives. Seamlessly weaving his signature holler amidst whispered storytelling and stream-of-consciousness outpourings, his latest offerings vacillate between the emotionally wracked, vibrantly symbolic, and ambiguously metaphysical. His meandering, technicolor vision of a world apocalyptic—populated with werewolves and vulturemen, shape-shifters and apparitions, android whales and an Idaho bride—combines the fantastic opulence of the group’s recent albums with the vulnerable personal confessions of their earliest work.

Longtime band-mates Mike Weiss, Rickie Mazzotta and Greg Jehanian continue to craft dramatic, nightmare soundscapes which lavishly complement their singer’s ecstatic hallucinations. The addition of Brandon Beaver (of Buried Beds, the Silver Ages) allows the group as a 5-piece to revisit its earlier intricate, layered fretwork, while adding new depths of vocal harmonies and ever-peculiar arrangements. Musically, the group hearkens boldly to the raw intensity of 2004’s Catch for Us the Foxes, while building on the rich imagery of 2006’s Brother, Sister. Epic in scope, Pale Horses is mewithoutYou at their best, breathing fresh life into the end times, gloriously terrifying and hauntingly iconic.

Their latest album also marks a new beginning for the band, as it’s their first to be released on Run for Cover Records. Teaming with the rising Boston independent label was the outgrowth of their partnership with Will Yip, whose masterful production transforms the band’s transcendental musings into a widescreen experience. Drums and bass lines quake with the faults of the earth, as an army of guitars and multi-instrumental nuances ring in the paranoia, mass hysteria and peaceful exaltation. The result is a stunning collage—fitfully disturbing, steadily bizarre, uniquely celebratory—undoubtedly the grandest musical adventure yet conceived within mewithoutYou’s expanding tapestry.

Tigers Jaw:
Making yourself vulnerable isn’t easy but it often makes for lasting art and that is certainly true of Tigers Jaw’s fifth full-length, spin. The album marks a new chapter for the Scranton, Pennsylvania-based indie rock band for many reasons: Not only is it the first collection of songs that was completely written and recorded solely by Ben Walsh and Brianna Collins, but it was also the first time they had a full month in the studio without having to worry about outside responsibilities. Furthermore it’s the inaugural release on Atlantic Records’ new imprint Black Cement, a label spearheaded by the band’s longtime collaborator Will Yip who returned to the production helm for spin.

All of these factors converged to create an album that sounds more fully formed than anything Tigers Jaw have done in the past and simultaneously establishes them as a band whose appeal truly transcends genres. While Walsh initially encouraged Collins to start singing lead vocals and songwriting with 2014’s Charmer, the duo’s collective output on spin is a collaboration in the truest sense of a creative partnership. “In a lot of ways this record is a return to the way the band started in the sense that it was coming from two people working very closely together and I think that resulted in something that was really cohesive,” Walsh explains. “The whole experience felt really organic even if the recording process was different than anything we had done in the past together.”

While Tigers Jaw’s previous four albums were recorded on tight deadlines and even tighter budgets, for spin the band would record six days a week for 10 hours a day over the course of an entire month — and while the band didn’t think they’d ever need that much time, ultimately they ended up utilizing every minute. “Having all of that extra time allowed us to track everything song by song to give each individual track its own unique focus,” Walsh explains. “It allowed for the freedom to play around with different ideas rather than keeping things tied to the way we wrote the demos; the performances, tones and structures were really tailored to each individual track which gave us so much room to play around and experiment together.”

From the sweetly syncopated, fuzzed-out bliss of the opener “Follows” to the midtempo melodicism of “June” and liltingly lovely ballad “Bullet,” spin sees Tigers Jaw stretching out sonically and correspondingly Yip was the perfect person to encourage the duo to approach things in a different way than they would have initially conceived. “Will is great at understanding what you want to get out of a song and pushing you to achieve that,” Collins explains when asked about Yip’s role “He had ideas especially about song structures that I might not have thought of and we had enough time in the studio to fully explore a lot of those ideas and see how they turned out. He didn’t try to change the way we wanted the songs to sound but he allowed us to step outside of our comfort zone.”

Tigers Jaw have always been known for their incredibly relatable lyrics and for this album Walsh tried something new: He experimented with stream-of-consciousness writing as a way to get his ideas out of his subconscious in an unfiltered fashion. “The lyrics I wrote for spin are very personal in the sense that there’s a lot of material relating to mental wellness, coming to terms with getting older and pursuing something creative like this band even though that might not be the conventional path for someone my age,” he explains. The album also sees Collins taking a shine to writing duties whether she’s writing a love song like “Same Stone” or getting introspective on the dreamy sounding “Brass Ring.”

Ultimately though, there isn’t much distinction between Walsh and Collins on spin in the sense that the two of them come together to form a collective whole — and not only do their styles perfectly complement each other, but at times their vocals are so in sync that it’s difficult to tell where one person’s voice ends and the other’s begins. “The two of us worked together so closely on this record especially when it came to layering our harmonies and I think along with open guitar chords and Casiotone organs, that’s what really makes this album sound like us,” Collins summarizes. “We needed to do what felt like Tigers Jaw — and I think we were able to do that in a really exciting way this time around.” 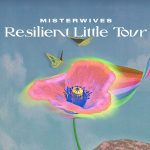 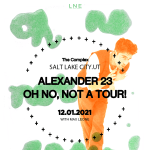 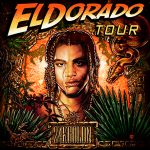 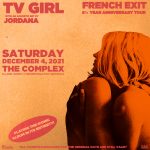 TV Girl at The Complex